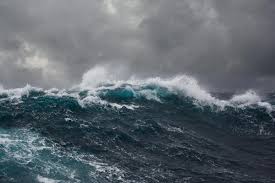 Janey didn’t budge when I slipped out of bed.  Out in the condo’s living room I pulled on my swimming trunks.  A quick peek into the boys’ room assured that all was well there.  Goldie, curled up in their bedroom doorway, looked up at me quizzically.  It was 4:30 a.m.

“Want to come?” I half whispered.  The old dog sprang to her feet and headed out to the deck.

I stepped out behind her into the pleasant summer air.  Our rental unit had an expansive deck that looked out over a beach.  Beyond stretched the .  It was still dark, but I could make out small breakers about forty yards from the deck steps.

“Low tide,” I thought, glancing at the setting moon.

I descended the steps and trotted across the sand to the water’s edge.  The water felt warmer than the air as I waded in.

“Come on,” I called back to Goldie.  She shifted her weight from side to side and gave a little bark, evidently thinking that I had momentarily taken leave of my senses.  Only after I dove through the breakers did she plunge in.

I’m a strong swimmer and had no trouble pacing the dog as we left the breakers behind.  Once or twice I rolled over and backstroked, wishing that more stars were visible through the pall of smog.  The sea was about as calm as it gets off the coast.  I hadn’t detected any breeze at all when we entered the water.

Five minutes out Goldie began to complain with little worrying sounds.  I, in turn, practically collided with a round-topped wooden buoy.  It bobbed up and down in the water.  In the dim light I could make out others to either side.

“Suggested boundary for swimmers?” I wondered.  I laid a forearm over the gnarled wood, not at all tired.  Goldie surged past, made a 180, and headed back to shore without explanation.  I let the old girl go.  Lately I’d noticed gray hairs on her muzzle.

But … at 45 I felt like I was barely past the height of my physical powers, and I decided to push on for awhile.  I kicked away from the buoy and settled into a comfortable crawl.  Four more respites of backstroking and I ran into another line of buoys.  I wondered what purpose this second set might serve.  Briefly toying with the idea of pushing still further out, I had a premonition that it was time to head back toward the shore lights.

With a start I realized there were no lights in view!  I wheeled around two or three times … a big mistake I realized almost instantly.  All I could see was mist.  A fog had rolled in that quickly.

Which way to go?  It occurred to me that, in spinning around, I was no longer sure which direction from the line of buoys pointed toward shore.  I treaded water and strained to hear something.  But the only sounds were those of water swirling around the buoy.  Real panic seized me.  If I headed off out to sea instead of toward the shore …

But then it hit me!  If I didn’t run into the first line of buoys in ten minutes or less, I’d know I was headed in the wrong direction.

I kicked away from the buoys, suddenly vexed by the prospect of another 20 or 30 minutes of swimming if I’d guessed wrong.  And of course my strategy depended on my swimming a straight line without anything to use for bearings!

Then my frantic mind seized on another thought.  It must now be at least 5 a.m.  The sun should be lighting the east.  I paused, treading water, and looked around.  There in the mist!  A slight glow!

“All right!  East!” I exulted.  I wheeled around 180 degrees in the water.  And this would be west!  But then, totally puzzled, I found myself staring into an equal glow.

I decided to head toward the second glow.  Cursing under my breath, I pushed off.  I was beginning to feel tired, and forced myself to a less strenuous sidestroke.  I could wind up spending another hour out here!  How could I have been so STUPID?  I began counting seconds as best I could.

“Stay the course,” I growled, swallowing some seawater and choking.  DAMN!  I could end up DROWNING out here!  I tried to force the prospect out of my mind and pushed on.

Another ten minutes later and I felt like I was running out of steam.  I was only half swimming and half treading water.  Slow progress.  I tried to be optimistic.  The good part was that, if I’d guessed wrong back at the buoys, I was only inching toward !

It occurred to me that my weakening motions might resemble those of a stricken fish.  And just then something scraped my legs.

“Ag-g-g-h-h!” I screamed gutturally, visions of “Jaws” flashing in my mind’s eye.  I stopped dead still, barely keeping my head above water.

There!  Again!  Something sniffing my legs!  I savagely dove forward and grabbed the attacker, dragging it to the surface.  Tears squirted from my eyes when I saw that it was only a piece of seaweed, broken free from the seabed and drifting along a few feet down.

Moments later I found myself agonizing over the prospect of Janey and the boys having to go on without me.  Would I wash up on the beach?  Or would my disappearance be a mystery?  Surely Janey would notice the pajama bottoms and the missing swimming trunks.  Would she conclude that I’d actually been stupid enough to go into the ocean, alone, in the dark?

As I pushed on with leaden arms, I could tell I was crying.  It had been years since I’d shed tears.  Not since my mother’s funeral.

“And now your own,” I acknowledged ruefully.  “Burial at sea.”

And immediately I heard it.  A faint bark.  Goldie!  Where had it come from?  To the left!

“Come on, girl!” I shouted across the waves.  I listened as well as I could, trying to make headway toward the last sound.

But there was no more sound.  Nothing but silence.  But then … snuffling sounds dead ahead.  Out of the mist Goldie’s head came plowing through the water.  I was too overcome with joy to greet her.  It didn’t matter.  She swam up to me, assessed my condition with a couple of sniffs, and veered back from whence she’d come.  I followed her like a puppy.

I was too weak to keep up with her, but she doubled back several times so that I could keep her in view.  It occurred to me that things were getting brighter.  The fog was lifting.

“Her keen ears probably hear the surf,” I guessed.  And before the thought left my head I could make out the white line of breakers and scattered shore lights beyond.

By the time I slogged up through the surf I was so exhausted I fell to my knees on the hard wet sand.  The old dog licked the salt water from my face, whining solicitously and wagging her tail wildly.

“Mama mia!” I grunted, struggling to my feet.  Goldie had taken the shortest line back to shore, and our rental unit was a quarter mile to the south.  I started the trek back, weaving on the sand slope like a drunken sailor.  Goldie, who normally would have taken the point out in front, seemed to sense my exhaustion and padded along at my side.

Five minutes later we’d made it back to the condo.  I was so tired I had to use the handrail to drag myself up the wooden steps.

“Where’ve you BEEN?” Janey scolded, coming out onto the deck.

“Do I smell coffee?” I asked, trying to hide my exhaustion and ward off further questions.

I sank into one of the chaise lounges.  It felt unbelievably wonderful.  Within seconds Janey set a steaming mug of coffee on the table beside me.  I took a sip, warming my hands around the gaily-painted container.  Janey seemed to sense that I was cold.  The truth was I was chilled to the bone.

“Here,” she said gently, draping a big beach towel over my shoulders.  “Relax and drink your coffee.  I’ll fix some breakfast.”

Goldie lay with her back to the deck railing.

“Good GIRL,” I said softly.  Her rope of a tail thumped the decking a couple of times.  Then with a groaning sigh she laid her chin on her paws and began snoozing.

I picked up a pair of binoculars from the table and scanned the sea.  The first row of buoys was clearly visible.  But try as I might, I couldn’t find the second line further out.  Did they even exist?  Or had I circled around after Goldie headed back to shore?  The hairs on my neck tingled when I considered just how turned around I’d probably gotten out there in the fog.

Down on the beach a dozen quarreling gulls swirled around what appeared to be a stranded fish.  As I took the scene in, I realized that it could have been my carcass washed up there on the sand.  Powerful feelings of gratitude and self-reproach swept through me simultaneously.

It had seemed like a miracle when Goldie answered my cry for help.  But now, in hindsight, I realized that her sharp ears had probably heard my voice floating in over the breakers.

“There’s an explanation for everything,” the engineer in me mused.  “There are no real miracles.”